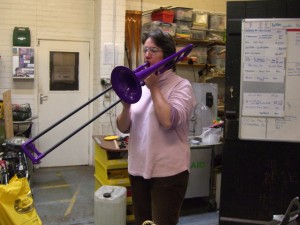 Iron Maid the Blacksmith who plays with Blendworth Brass Band has recently received her new purple plastic trombone. Lucille who is Iron Maid often uses a spare moment at the busy Little Duck Forge to keep her “lips in” and have a blow on the Trombone. She was interested in the new trombone made in plastic which reflects her interest in the use of different materials for traditional uses.

Whilst plastic is not going to take over in the near future, it has a number of advantages for certain situations not least the introduction of the instrument to a new generation of players.

“The revolutionary pBone has brought an intriguing twist to the traditional trombone. With its plastic construction, the pBone has taken the trombone market by storm!”